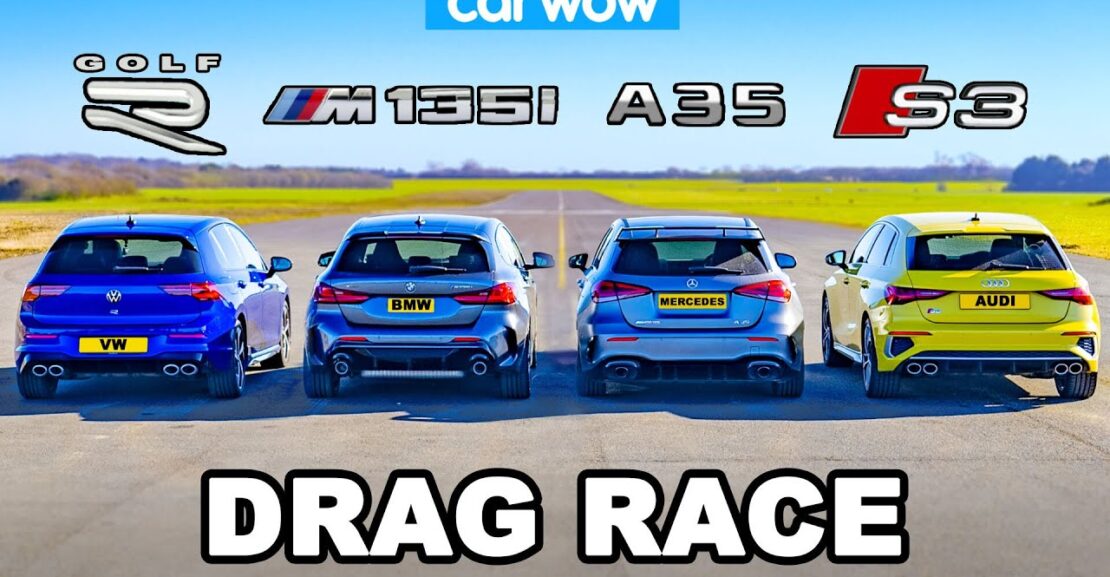 If you are looking for a German Hatchback under £40 000 pounds, you are spoiled for choice. The hot hatchback segment is hotly contested and has become more than just settled versions of a cheap commuter car. Performance, handling and luxury have increasingly become bigger selling points. And unlike the Honda Civic, understated a grown-up exterior is a positive selling point. This allows buyers to have that boy-racer fun, without the over-the-top look. Mat Watson of Carwow takes the VW Golf R, Mercedes A35, BMW M135i and Audi S3 and pits them against each other in a German Hatchback battle royal.

The VW Golf GTI has been the benchmark of the segment. The R version offers everything the GTI does, but with more power and grip from the all-wheel-drive system. Like the BMW, the R is the top-spec of the model and as such sports, a 320hp turbocharged 2-litre engine, making 420Nm of torque. At 1551kg, the Golf R is the lightest of the bunch. The venerable DSG, dual-clutch gearbox takes care of the shifting.

The 1 Series hatchback is the outlier of the group with a torque converter gearbox. The M135i also weighs the most with a curb weight of 1600kg. However, the 2-litre turbocharged 4 pot, has the most torque at 450Nm and a respectable 306hp.

Not long ago the A series Mercedes was an awkwardly shaped commuter car. Now it’s attractive, and in AMG guise, capable hot hatchback. Its bigger brother A45 moved the hatchback arms races forward several leaps and bounds. The A35 however, is the more sensible restrained sibling with its 2-litre turbocharged engine putting out a modest 306hp and 400Nm by comparison. The 1555kg curb weight sits neatly in the middle of this group.

The Audi is essentially a sibling to the Golf R as it is also a VAG product. The S3’s engine has an output of 310hp and 400Nm. This is touch lower than the Golf R; and to add insult to injury the S3 also suffers from a 25kg weight penalty compared to the Golf R. A dual clutch gearbox sends power to all four wheels as in the Golf.

Just about £2000 separates these four models; watch the video below to see how that translates down the airstrip.