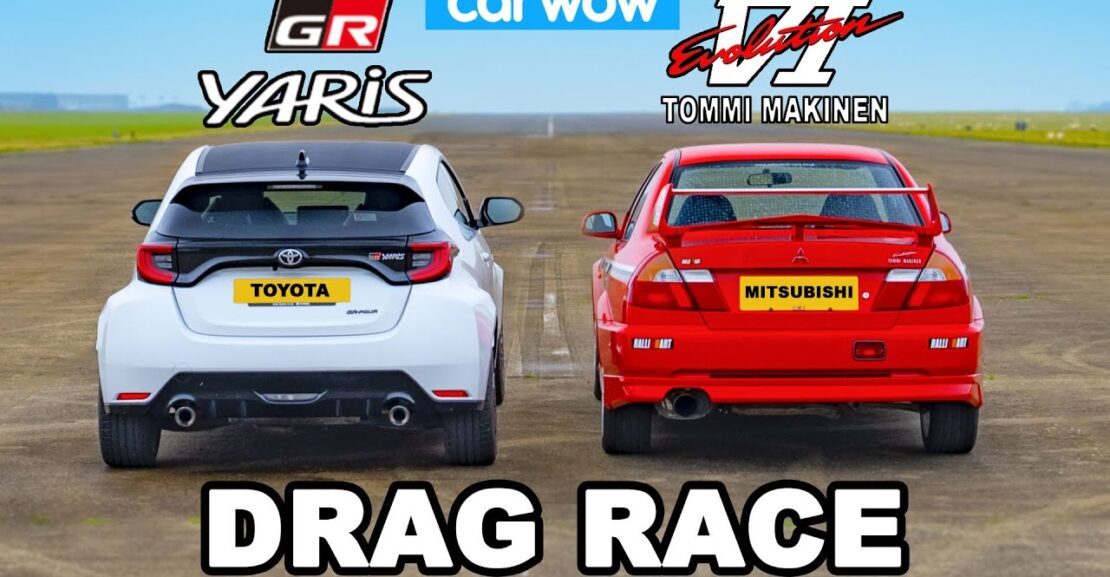 Toyota has been on a bit of a winning streak of late. As controversial as the BMW Toyota MK5 Supra is, the fact that Toyota has given enthusiasts something to be excited about. The GR Yaris takes this further, bringing to mind the rally legend Celica GT Four. The tiny Yaris packs a mighty 200kW punch with a grippy all-wheel drive train to truly make it a hot hatch.

This particular drag race is something of a Tommi Makinen battle shadow fight. Think fighting your alter ego in your favourite beat-em-up video game. This is because the Mitsubishi Evo VI featured in this drag race is a Tommi Makinen Edition. Built by Mitsubishi in 2000 to commemorate his 4 Championships for the team during his time as a WRC driver. This road-going Evo features a 2 Litre turbocharged engine churning out 276hp and 376Nm of torque. All this horsepower is sent to all four corners to give the Evo ultimate traction. A close-ratio 5-speed transmission takes care of the acceleration of the 1360kg vehicle.

The other side of the Tommi Makinen battle is the GR Yaris. Gazoo Racing under the guidance of Tommi Makinen developed the GR Yaris into a World Rally Championship winning car. This makes Tommi Makinen so far the only person to have won the WRC as a driver and team principal. The road-going version of the GR Yaris is powered by a 1.6L three-cylinder motor, sending all 261hp and 360Nm of torque through a 6 speed manual to all four wheels. The GR Yaris carries a weight advantage over the Evo, coming in at 80kg lighter. The GR Yaris also has the advantage of newer technology, advanced torque vectoring and auto blipping manual transmission.

Check out the old versus new rally legend races below.