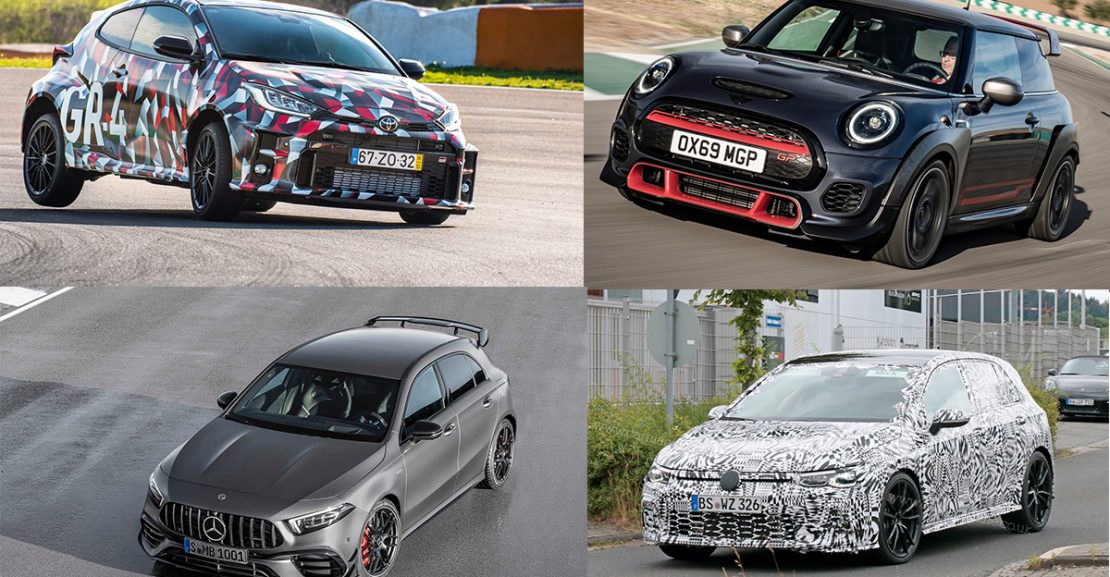 Hot hatches started out life as the most usable simple performance cars you could buy. Much like every other car these days; hatches have gotten bigger, heavier and in some cases much more expensive. Still there a still hot hatches out there that will excite on your morning commute or to the occasional blast down your favorite stretch of road. Here’s our pick of 4(ish) hot hatches to look forward to in 2020.

We could make this whole list solely based on the Wolfburg marque’s 2020 Golf lineup, but that would be a little unfair. VW has got every flavour of hot hatch launching in 2020. Do you want something hybrid? Have a GTE. Want something all wheel drive? There’s an R. Need a modern classic hot hatch? The faithful GTI is available or it’s TCR varient if track days are more your speed. Like the surge of torque over horsepower? The diesel GTD will keep you entertained. The Golf has earned a reputation for being an excellent all round hatchback and by offering such a variety of flavours they are sure to appeal to a wide audience. The GTE has a 1.4L engine with a hybrid system to give you almost as much performance as a GTI. Details on the other models performance are still light at the moment. The most powerful version, the R will have over 300HP.

The Mini Cooper John Cooper Works GP to give it its full name is akin to a Porsche GT3 RS in hatchback form. Designed and built to tackle track days before anything else. The GP comes complete with carbon fibre, racecar aero and scaffolding where it’s back seats used to be. This of course means the Mini GP is less practical than its more sedate than the rest of its range. The Mini GP produces 302bhp from its 2L turbocharged engine. The 8 speed auto ‘box is sure to disappoint as it dampens that driver engagement that made Mini’s so fun to drive.

The GR Yaris is a homologation special unlike the limited edition Yaris GRMN . The GR Yaris is being developed as Toyota’s entry into the WRC-2 in 2020.Tommi Makinen (former WRC champion) is currently the Team principal of the GR rally team. He and a team of current rally drivers have been very involved with the development of this Yaris. All four wheels will be driven by the 250+bhp 3 cylinder turbocharged engine. If thats not enough good news, the Yaris will only be available with a manual 6 speed transmission. It has all the makings of a modern hatch version of a Celica GT-Four.

Hot hatches are supposed to be affordable, slightly spicier versions of appliance grade commuter cars. Mercedes AMG have a slightly different idea. Unlike the GR Yaris and the Mini GP, the A45S is not a track focussed weapon, and it yet it packs a monstrous 416hp. A typically luxurious Mercedes interior, with a fairly standard if somewhat menacing exterior belie its ability to be an all wheel drive hooligan. Drift mode on a Mercedes hatchback? No one would have imagined it possible in 1997 when the first A Class was launched. The one thing you probably won’t be surprised about is its class topping price tag.