Why Tesla Vs Porsche matters & why it doesn’t

Why Tesla Vs Porsche matters & why it doesn’t 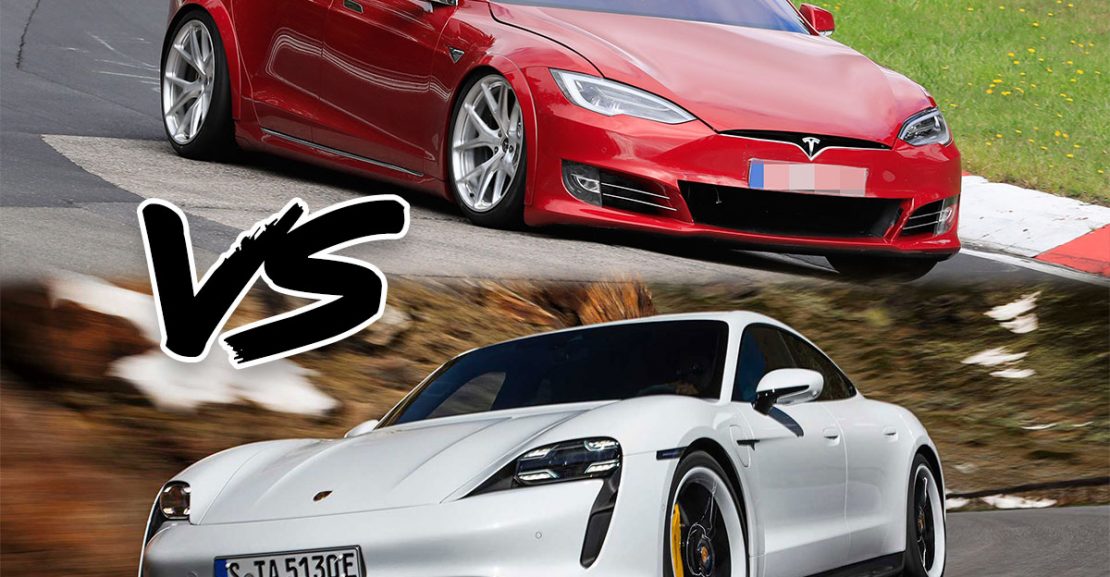 Evo versus Sti. GTR versus Supra. Mustang versus Camaro. The world of auto enthusiasts is full of never ending rivalries. Match-ups that get reignited with each new model release. Now unless you’ve been living under a rock you’ll have seen a new rivalry blow up every automotive blog and youtube channel recently. Porsche Taycan vs Tesla Model S.

It all started when Porsche did what Porsche does, sending their latest model, the Taycan Turbo to the Nurburgring and set a new four door EV lap record with a 7:42. For some context thats 2010 Nissan GTR, C6 Corvette Z06 and Murciélago LP670-4 territory. A four door electric vehicle storming the ring in the company of supercars. And of course Elon Musk did what Elon Musk does. Announced to the world via Twitter that he was going to send a Model S to challenge the Porsche. Three prototype Model S’ later and a theoretical 7:23 and the internet went into meltdown. Porsche and Tesla fanboys were at each other’s throats like never before.

So Why Doesn’t it Matter?

In a five words, “modified Model S versus standard Porsche”; it’s apples versus oranges. A production specification Taycan Turbo was pitted against a stripped prototype Model S with it’s next generation motors, new bodywork and slick tyres. According to Tesla’s data and track side publications, the Model S was on track to smash the Porsche’s record by 19 seconds. The prototype Tesla’s continued their testing for a few more days until they encountered some mechanical failures that couldn’t be solved at the track. It’s only a matter of time before Tesla returns with a production spec model and goes for an official run around the Nurburgring. Only then will we be able to have a like to like comparison. And let’s not forget Porsche’s more powerful Turbo S is still to tackle the ring.

Why It Does Matter

Car enthusiasts have often picked on the Prius and Nissan Leaf as the end of petrolheads, and Armageddon brought on by these anti-car appliances. The quest for environmentally friendly transport has largely focused on everyday, commuter transport; it’d didn’t need to be exciting just functional. The Tesla snuck into the heart’s of car enthusiasts with help of its larger than life CEO, its insane acceleration and straight line performance. Porsche is known for it’s sports car heritage and their ability to infuse that DNA into any of their vehicles, including EV’s so there was a lot of expectation.

A decade ago car enthusiasts would not bat an eye lid at electric cars, much less which was the better around the Nurburgring. But now after such historic moments like the trinity of the Porsche 918, Ferrari LaFerrari and Mclaren P1; car enthusiasts have seen the potential for hybrid and EV technology for speed. Whilst EV’s currently lack the noise and theatre that their petrol drinking counterparts provide; the instant torque and acceleration have earned them adoration of countless fans.

As battery and charging technologies improve, range anxiety will be a thing of the past. Companies like Rimac and their Concept 2 and now Lotus, with their Evija are investing heavily in all electric hypercars that will surely move us even further into the future. The near 1000hp available in each of the hypercar trinity pales in comparison to the 2000 all electric horsepower available to these sleek hypercars. Now that EVs are more than just appliances to get us from a to b, car enthusiasts are slowly warming to the idea that maybe you don’t need petrol to be a petrolhead.

More manufacturers are entering all electric race series like Formula E and some like Mercedes Benz are halting development of new combustion engines altogether to focus on emerging technologies. This at the end of the day, is why the Porsche versus Tesla battle matters. It shows that while the majority of car enthusiasts still prefer their vehicles to be powered and lubricated by dinosaur juice and make ear shattering howls and rumbles; there is appreciation of the raw performance available from EVs. There is no need to add a qualifier (“it’s fast…you know for an EV”), electric vehicles are becoming genuinely fast and if anything have a performance advantage over conventional cars. The speed at which EV technology moves means that they will only get faster for longer much sooner than we expect.