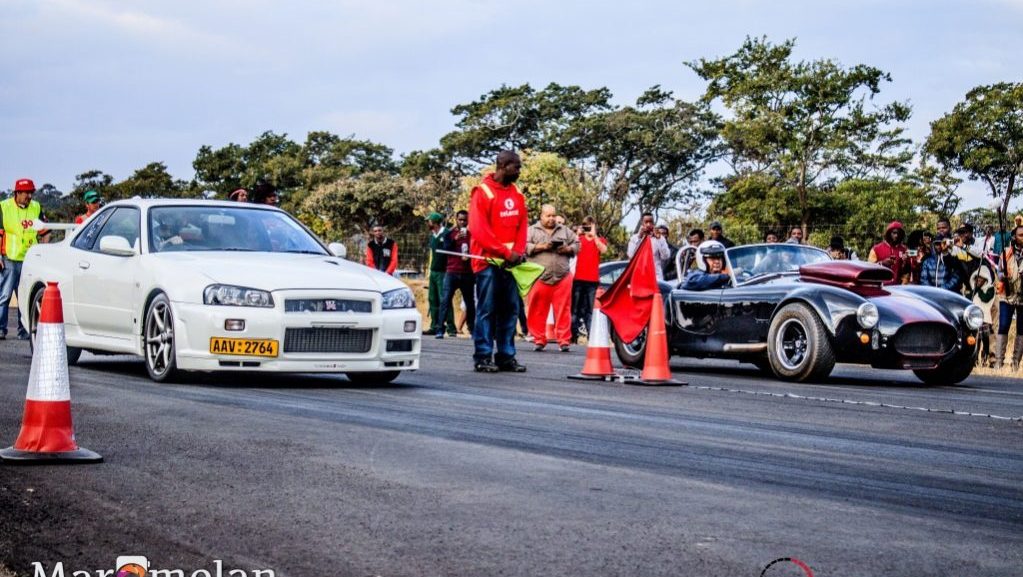 A slippery slope is defined as “a course of action likely to lead to something bad or disastrous”. For a Zimbabwean petrol-head, drag racing is the gateway motor sport that will lead to a lifelong fall into “bad” decisions.

Hi, my name is Tate and fallen head first down that slope…

About 6 years ago I heard there was some racing going on at Donnybrooke, I’d never been there before, but I’d heard the name said here and there. At this point I ha been keeping my need sated by shows and movies  like Top Gear & Fast and Furious, various articles and online videos but the yearning was beginning to surpass these substitutes. After seeing some suitably fast looking cars at a motor show I wondered what I would find at an actual race track.

I arrived at the track fairly early, the short dusty drive to the track, with the windows down, was filled with anticipation; even more so, as I heard the roar of the engines behind the little dunes. I knew I was close and could barely contain my excitement. I soon found a parking spot on the spectator side of the the track and stood by the fence watching race after race. Eventually I struck up a conversation with other enthusiasts on the sidelines, speculating who would be winning the next race.

I died a little on the inside knowing that my own beloved car, Jezebel, was unable to participate. Still after finding out how easy it was to take part, I decided there and then that I had to try it out and see how we (Jezza and I) would do. I really had no ambitions to win or become some kind of record setter but rather take advantage of an opportunity. A chance to push my car as fast as she would go as many times as I could, with no road blocks or speed limits to worry about.Eventually I got the chance to see what we were made of. I  hardly slept the night before , made sure the oil and other fluids were topped up. I was up early and packed the car with  snacks and refreshments, to be honest I wasn’t  sure if i’d even find the time to eat or drink anything, especially if it meant less racing time.

After filling in a few registration forms it was time for tech inspection, a simple safety check to see that your battery is secured and seat belts work and nothing in the car is likely to fly into your head should the worst happen. A quick trip to empty any unnecessary items from the car i made my way to the start line. This was the second most nerve wracking thing about the whole day, watching the pairs of cars ahead of you taking off as you inch closer and closer to the tree, your opponent right by your side. As i approached the start line the marshals checked to see I was strapped in and gave me a quick explanation of how it would all go down. Inch up to the line, wait for them to clear the track, watch the lights and then take off. Simple right? In theory yes but even with my slush box and not having to worry about shifts i still had a million things running through my mind trying to recall what i’d read in forums about the best way to launch my car.
Ok, left foot brake. Ease up the revs to 2200rpm. Or was it 2500rpm? Wait neutral first, blip the throttle, feel the brakes bite more. Right, the revs 2200rpm for sure. Steering wheel straight check. Handbrake isn’t on is it? Nope. Ok, thumbs up to the marshal. Oh hey look at the crowd. Hope I don’t mess this up somehow. Oooo ok, lights are flashing. Don’t jump the lights. Three. Two. One. Go!

I can’t for the life of me remember who my first race was against but as soon as the light went green and the initial pause of waiting for the turbos to spool up (stupid slushbox), all the nerves just washed away as the crowd on the sidelines turned into a blur of shapes. Second gear. Another surge forwards. Third gear. I glanced down i saw myself climbing comfortably past the national speed limit. Then came the finish line and my next concern. Unlike a conventional drag strip, we have curve soon after the finish line but as i soon found out, its a fairly gentle sweeper that a smooth application of the brakes easily dealt with. It’s only after that sweeper did i realise my heart was thumping in my chest, oh right, and I needed to breathe.

Needless to say 6 years later,a few trophies and sixty or so time slips later I’m still as addicted as ever. For the most part it’s been a positive experience, I’ve met some very cool people, managed to have friendly rivalries that have pushed Jezza and I to improve. And at this point I must make a confession, I didn’t think I’d race past my first event. I thought I wouldn’t be interested in driving in a straight line for 400m for more than a day. Well, as I came to learn, drag racing is far move involved than just mashing the loud pedal. I leave every event having learnt something new,  figuring out something to improve or finding a new person to try  and beat.

The best (and possibly geekiest) analogy I can come up with is: Drag racing is like playing a Role-Play strategy video game. Your car is your avatar and you choose to modify and increase certain attributes, but if you’re going to succeed you will need to keep yourself balanced. Too much power and you won’t have enough traction to push you forward. How are the tire pressures front and rear? Too little or too much can cause problems. Do you have enough cooling to do lots of back to back runs?

Figuring out those variables is one of the things I love about drag racing but there’s gotta be some down sides to pushing your car to the limits right? Yes of course, the more your car is modified the more it moves away from what the manufacturers intended. But that doesn’t mean that you can’t have fun with your stock standard car, if you and your friends have the same car or similar ones it’s a great way to safely see who is a better driver. And as long as your car is fairly standard and well maintained you shouldn’t have anything to worry about.
Now we come to the elephant in the room: MONEY? The costs are not too bad actually, $5 to register, $10 medical insurance for the day, $20 refundable deposit to rent a helmet ( I ended up keeping mine). If you’re looking for NHRA  or Street Outlaws level prize money, you’ll have to wait a little longer because we’re not there yet. But once you get addicted to the fun you can have in a day is worth the cost of entry, and hey if you place in the top three, you’ll most likely earn back your fuel costs; depending on how thirsty your car is, plus you won’t have to worry about your oil come your next service. I’m certain once the economy in general improves so will the race times and the number of new addicts to the sport.

So this has been a quick history of my addiction.
Drag racing is my slope & Sables Dragpro is pushed me down it, you want to fall too?