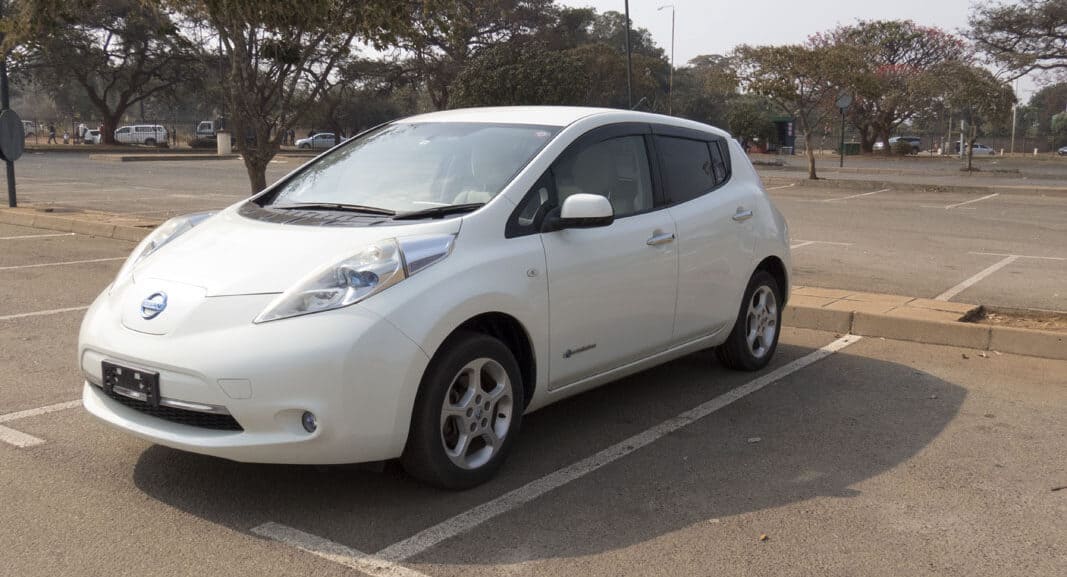 Zimbabwe is no stranger to fuel shortages; a simple google search for the term “fuel shortage” on Google image shows “Zimbabwe” as the fifth suggestion after ‘1970’, ‘oil’, ‘gas’ and ‘Georgia’. Click on Zimbabwe and there is no shortage of pictures of fuel queues; taken over the two and bit decades of Zimbabwe’s hate-hate relationship with fuel shortages. So it should come as no surprise that people look for alternatives to avoid them; by turning to fuel savers, modifications such as LPG conversions or simply Electric Vehicles(EV) such as those offered by e-Mobility Traders.

I got to spend a short time experiencing the world’s second best-selling EV, the Nissan Leaf for a day to try to figure out if it’s something we, as Zimbabweans, should consider. After all, many European countries have already announced the ban on combustion engines, in the next decade, and manufacturers are moving quickly towards electrify their product line-ups to some degree.

The Nissan Leaf entered production in 2010 equipped with a 24kWh battery which during a mid-life refresh was increased to 30kWh. These gave the 80kW motor a range of 120km to 175km (depending on the testing entity). The five-door hatchback was styled to give the Leaf an efficient as possible aerodynamic footprint to increase its range. It immediately reminded me of the smoothed and tweaked Nissan Tiida that was first launched 7 years prior. The space inside is ample due to the under-floor placement of the batteries, but we’ll explore that more in-depth later.

After collecting the vehicle, a 2011 model in white, I was surprised to have several motorists ask me, at intersections and in the parking area, if that really was that ‘Electric Nissan’. The styling whilst leaning towards the inoffensive does stand out enough to differentiate it from the sea of hatchbacks on the road. There is minimal badging to let you know that this is an electric vehicle; although the lack of frontal intake should be a dead giveaway to those with a mild interest in cars.

The charging port can be found under the nose panel which flips up to accept the charging cable. The motor and electronics sit under the bonnet where the engine would normally sit. It is somewhat amusing to find a conventional car battery under the hood. The only fluids you’ll find though are the reservoir for the brake system and coolant. Maintenance is quite minimal with the brakes and airconditioning being the only other consumables an owner needs to worry about.

The interior is a run-of-the-mill Nissan hatchback of the period; save for the digital dash and the futuristic drive selector that sits in the centre console. The dashboard display is simple to understand. It lets the driver know the health of the battery, remaining charge & range and how eco-friendly you are driving. The usual trip distance, speed, and a battery temperature gauge., instead of the usual engine temperature one.

The infotainment of this particular model was in Japanese but fairly simple to navigate thanks to the large buttons on either side of the screen. USB, Bluetooth, CD, and radio functions were all present and accounted for.

The interior was spacious with plenty of headroom. As mentioned previously, the Leaf’s batteries are under the floor; and because it is front-wheel driven there is no need for a transmission tunnel to run along the centre. This left plenty of legroom behind the front seats to comfortably seat passengers on any trip. The boot was decently sized and has a false bottom to store the charging cable and other small items. The rear seats also fold down, in the event extra space is required to load larger items; the only downside is that it doesn’t fold completely flat causing a slight problem.

Sitting in the Nissan Leaf with everything off you’d be forgiven for thinking it was a normal petrol-powered vehicle. But press the start-stop button and the Nissan dings to life. And that’s about it; save for the digital double dash and the infotainment, there is nothing but silence. Looking down to your left on the centre console, you put the car in gear with something that looks like it belongs in a spaceship. The display tells you that you’re in drive; slowly depressing the accelerator the Leaf rolls forward, still in relative silence. It’s only an 80kW motor, about the same amount of power you’d find in a 2002 Toyota Corolla 1.6L. The difference here is that all 280Nm of torque, about 60Nm more than a BEAMS powered Toyota Altezza, is available the instant you depress the accelerator. This gives the Leaf a surprisingly peppy acceleration.

It’s easy to see how people get enamoured with Tesla and Taycan acceleration, no turbo lag, no waiting, just an instant shove towards the horizon. The Leaf however isn’t anywhere near the same league as those but at least there’s no fear of not being able to overtake or make your way out of a junction.

The rest of the driving experience is pretty much as you expect. It handles the bumpy Harare roads decently enough. It’s comfortable and obviously quiet; no small engine being wrung out just to keep up with traffic. I purposely drove with the radio off to really feel the car out. You don’t quite realise what road noise is until you drive an electric vehicle. Without the hum of the engine or music, you can hear every pebble being thrown into the wheel well and every crash of the suspension against the bump stops when you fail to dodge a pothole.

It might just be the nerd in me but the faint whir of the electric motor was kind of appealing. The Taycan has a Jetsons-Esque soundtrack piped in to give you a sense of what the car is doing. I must say I thought it was silly at first but I think it’s a great idea; without some sort of auditory signal, there isn’t much of a sense of occasion. The only other thing I had to occupy my mind with was the range.

Range anxiety is similar to that feeling you get when you’re out and your phone goes down to 20% and you have no idea when you will get to a charger again. Quite appropriate since the Leaf is powered by stacks of phone-like Lithium-Ion batteries. Even in more developed nations where charging infrastructure is more widespread, the anxiety brought about by the potential of running out of joules, whilst being nowhere near a charging station can put buyers off an EV. With a conventional combustion-engined vehicle, you have the option of jerry cans to quickly get some fuel. EV’s don’t have that luxury and although I knew my journey was way less than the advertised range I found myself constantly checking it to see how my driving style was affecting my range.

The Nissan doesn’t quite have one-pedal driving but with a slight adjustment to your driving style, think hypermiling, one can make good use of the regenerative braking. Looking down the road and easing off the accelerator before you need to stop, allows the Leaf’s regenerative braking to recharge the battery. Driving downhill, in particular, was especially satisfying as the range climbs quite easily. Everything you do in the car will have an effect on the range; air-conditioning, heating, lights all have an effect on the range left. While combustion engine cars suffer in stop-start traffic, EV’s thrive; conversely cruising at highway speeds does the Leaf no favours.

Should we all import second-hand Nissan Leafs?

The short answer is, it depends. The Nissan Leaf is a very capable commuter car with decent looks and is comfortable and spacious enough to cover most people’s needs. The rising prices on the second-hand market, pandemic madness aside, shows that demand is still high for this vehicle. The 130km range is not much, however, there is the option of purchasing the newer EV’s with newer battery tech that have longer ranges. Nissan has, for the Japanese market, even started to refurbish older batteries in early Nissan Leafs. I don’t believe that a second-hand Leaf is for everyone but there are definitely drivers out there who would benefit from a switch.

If your commute is less than 40km one way, and you have a power outlet near where the car is parked; then a Nissan Leaf may be the car for you. A 20km daily commute would mean that the Leaf would only need to be charged every 4 days. If left overnight, every morning should provide a full battery to use the next day. The average charging time with the 3-pin plug takes about 3-6 hours, which conveniently comes standard with the car.

If you work from home and only need the car to run errands at a nearby shopping centre or a school-run, then the Nissan Leaf could also be the car for you. Ideally, it would be the run-around car and a second petrol-powered car can be used for longer/out of town trips. If you have a business that makes deliveries to clients within a defined delivery area an EV would be a great choice. At about US$3/100km it would make business sense to invest in an EV.

Second-hand Leaf’s are not a one size fits all solution. They are however a viable option to suit some people’s lifestyles. With around 20 Nissan Leafs locally, the number is likely to increase. The world is marching towards an electrified future so it’s only a matter of time before the infrastructure meets the demand.

A special thanks to e-Mobilty Traders for providing the Nissan Leaf. Head over to their website or Facebook page to get more information to order your own Leaf or other EV.