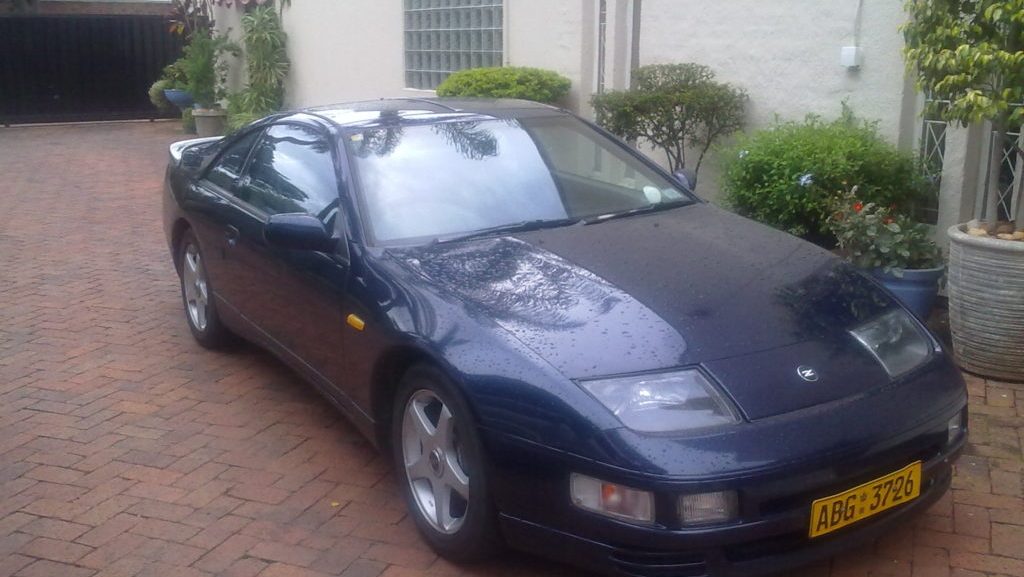 What follows here may not seem like the greatest love story and its certainly not the easiest, but like a movie it has its ups and downs, and if the movie were to end as i write this, i’d say it has a happy ending. I have a feeling this story is far from over though so let’s start at a very definitive point: the beginning.
The story of how i found Jezebel, my 1990 twin turbo 300ZX.

This particular beginning starts about 7 years ago and 3000 miles away from where i am now. The date is sometime 2006(possibly earlier judging by the dodgy cellphone camera picture), after an evening visit or shift at the local groccery store i worked at while a student in Brisbane Australia. Looking back at it now this may have been the first 300ZX i’d ever laid my eyes on, and the last for a while, but one that probably stirred something deep in my soul.

Several years later and having moved back to Zimbabwe, id forgotten all about that lady in red and carried on my merry way admiring sports cars but not really having the urge to own one anytime soon. Or at least that was the case till i started a new job and had to drive past what would become the love of my life everyday.

$9000 was the original asking price when i first spotted her but as the months went by she moved from the roadside to further back in the yard and the price went down too. In a fortunate twist of fate, i found myself looking for a new car…one that didnt need to meet any requirements other than have an engine and get me from point a to b. After a few stops to check her out and some googling(albeit quick) i decided to go through with the buy after a once over by the kind people from AA.

Apart from a holey exhaust she showed no major issues, so a quick haggle on price to replace the exhaust with the seller, she was mine for under the advertised $8000 asking price she’d dropped to. And after a few days awaiting the new exhaust (which i later found out would have cost me nothing extra to go bigger than stock) and a service, i was happily putting about in my very own 90’s sports car.

It didnt take long but i learned quickly what a difference ground clearance made. Now my Z is not low compared to all the stanced cars in the northern hemisphere but when coming from a 4×4, our Harare potholes look like canyons and speed humps like mountains. I developed a mental catalogue of best routes and mastered the diagonal speed hump approach. Despite all these impracticalities i loved it, the looks from bystanders, the driving position, the sound and the power. I’d find myself taking the long way home or even jus going for a drive on a Sunday afternoon jus to put a smile on my face.

Life was good for a while, but as with every relationship, the honeymoon period ended. It’d started small but snowballed into a dark period of depression and annoyance. But even in these dark periods there is a silver lining, and often when u make it through tough periods it creates a stronger bond. More on that in the next post…