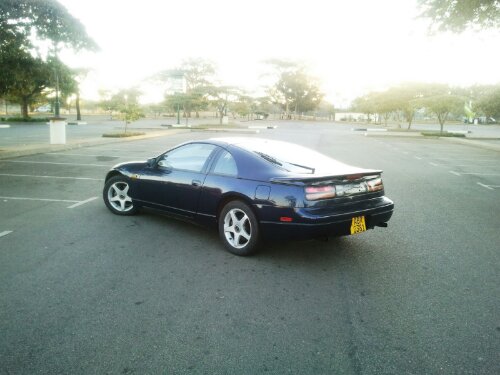 I’d never considered Jezza to be a project car, not something i actively planned to upgrade or build to any specific power output. If she’d been trouble free from day 1, i probably never would have changed a thing and driven her in a completely stock state forever. Fate & wear and tear obviously had other plans…

After having no luck with 2nd hand turbos and leaving the car parked for almost a year, time and funds aligned to finally start on some longer overdue surgery. My mate/mechanic Paul came over to collect the car and gingerly drove it over to his place so he could get to work at pulling the motor. I would head over there a few days later to pick up my very worn turbos and out of the 3.5 remaining turbos pick the best pair for the rebuild.

I can’t even remember how many times over the previous year i went by to TSA in Msasa to ask questions about the options i’d have once i finally had the cash together to do the rebuild. As i’d said before i would have happily had the car stay completely stock but when the price difference between harder to find stock components & easier to find uprated ones was so close…why wouldn’t you go bigger? So basically out went all the old bits and in went shiny new T25 internals into my stock housings. This would allow for better flow, slightly more lag but keep the bolt on ease when putting them back in the car.

The 2 week wait (thanks to some component import delays), was like the December run up to Christmas for me, waiting for the day i’d hear the engine roar back into life. Looking at the turbos all clean and polished, well i almost didnt want them to go back into the car just to get all dirty but that would have been a whole lot less fun. So after dropping them off at Paul’s i again waited for everything to be bolted into place.

Somewhere in the period of waiting i’d bought myself some new speakers to replace the ratty 23yr old paper cones & a cheap eBay turbo timer i’m still yet to install. But looking at this neatly organised group of consumables i began to get very excited. As far as i was aware, i was about to get my baby back

Or at least thats what i thought… After it was all bolted back together and dropped in the car, it was left to idle for a while to try get most of the oil out the exhausts and make sure everything was ok. It wasn’t. Driver’s side exhaust cleared up pretty quickly but not so much on the passengers side. At this point all that was left to confirm the fear was to do a compression test.
I don’t remember off-hand what the numbers were for cylinders 2 & 4 but they were low enough that they may as well have been zero. To say i was gutted would be something of an understatement but sulking about it wouldn’t have helped so out and came the motor & off i went to ebay.

Rings & a head gasket set were ordered from the UK and then we wait began for the parts to arrive and for the motor to be opened up and to inspect the state of the damage. So while Paul, had many late night and long weekends, i’d be sitting at the phone watching the motor progress and on weekends go over to see what is in automotive terms open heart surgery on my first love.

It’s one thing to sit at a computer and google the symptoms and worse case scenarios, but when that picture of broken pistons comes in…well…it kinda leaves you speechless. I gotta say though, it’s probably more so to do with Paul’s can do attitude more than anything else that i didn’t just throw the towel in. With each new issue, he’d just say, “don’t worry we’ll make a plan” and sure enough we did. Luckily for me he had another motor sitting unused that we’d scavenge parts off, namely 2 pistons, unluckily though the broken rings had left some pretty nasty gouges in the cylinder walls.

What we then decided to do, to save time ad build the best motor out of what we had was, take my crank,rods and heads and put them together with the other block and pistons. Jezza would live again thanks to some timely donor organs. So the waiting began again as things were checked, cleaned, moved over and put together. It was sometime after this when i read an article on another blog about the “project car blues”. The moment when things seem to be taking one step forward and 2 steps back. It had seemed like that for me, with the turbos and the rings, and the pistons but as things slowly started coming together; each issue solved with better (and newish) parts, i kept thinking that it’d all come together better stronger than before.

Soon though it was all done and ready to ready to go…again. And yeah the excitement was full to bursting. Even so there was a bit of trepidation, wondering if this would really be the end of the hole i’d jumped into. If it was all worth it or i’d just been burning money.It was a Monday or Tuesday night when i went to pick her up, it was dark but even in the poor lighting she was the prettiest thing i’d seen for a long time. Sure we’d fired her up soon as the motor was in but with no exhaust, bonnet or front end she’d been rough and half naked. Now though, all clean and complete she was sultry, purring away, smoother than i could ever remember. After a quick chat and probably more thank you’s than was sane to Paul, i settled into the drivers seat and gingerly drove her down the driveway.

She smoked quite a bit to start but there was oil that needed to be burned out, or so i reminded myself. I had researched the best way to “run in” a new motor and of course being the internet there were two million opinions on the subject. I had decided on the drive-it-like-i-stole-it method at the local track but time wasn’t really on my side and i didnt want to risk any oil starvation issue through the corners so instead i decided on a 70ish-km early morning drive, in second gear to really load up the motor and bed the rings as fast as possible.

I dont think i’ve ever been so happy to wake up at 5AM, but there i was coffee in hand while i waited for the Z to get up to operating temps before setting off on the drive. The sun was just starting to rise, and the roads were clear; just the way all days should be started. Hearing the turbos spool up, and the surge of power as Jezza powered forward was a feeling i’d missed but i didnt realise how much till that morning.

The trip was mostly uneventful and full of childlike giggles at each and every pull apart from a cutout and epic fuel usage which we later found to be due to a vacuum leak. The oil in the exhaust burned out about 13kms before i got home so that was another pleasant bonus.

The trip meter in the above pic was reset after 400km, at which point we’d sorted out the vacuum leak, just so i see how normal the fuel usage was. So really what this 619km signifies is the first 1000km’s in something close to a year, that only took a couple of weeks to cover. It also shows how little this car has actually been on the road since i bought her 3 years. Even so, every single kilometer in the cockpit has been better than any of the other thousands i’ve experienced in any other car & it all boils down to one simple fact.

Every other car i’d owned or driven before this 23year old sports car was simply a mode of transportation; Jezebel is a so much more than that. Corny as it may be, she’s my fair lady.