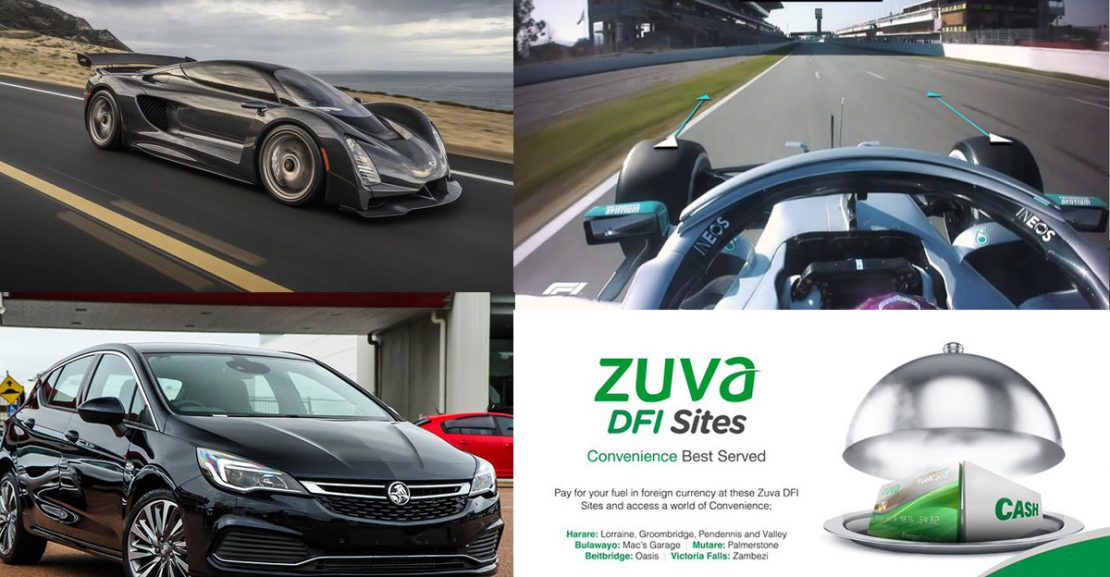 Last week’s news was a truly mixed bag. New motorsport innovation from the Mercedes AMG F1 team. A semi return to foreign currency fuel in Zimbabwe. 3D printed hybrid hypercar from America and the end of the iconic marque from down, Holden.

Formula one has always claimed to be at the forefront of automotive innovation. A lot of technology found in Formula One, trickles down to everyday passenger cars. From engine performance, aerodynamic innovations and hybrid technology. The purpose of all these innovations is first and foremost to win races. This season is no different with Mercedes AMG surprising the rest of the paddock with their innovative Dual Axis Steering. It was first spotted on TV footage with Lewis Hamilton at the wheel. The simple system adjust the toe of the front wheels on the straights and in the corners to maximise performance and save the tires. Typically F1 cars run with toe out ( front’s of the tires point outwards), this gives them better turn in. The downside of this is the wear and scrubbing on the straights. By using DAS, Mercedes should be able to get the best of both worlds.

Unsurprisingly, many teams were keen to hear the FIA’s opinion of such a system. Luckily the system has been deemed legal, so we will see how much of an advantage it provides. Some teams have claimed it would take them up to half the season to implement the technology on their own cars, but with the FIA ruling it illegal for the 2021 season it’s doubtful any team will pursue a similar system.

Zimbabwe’s fuel market got another shake up as the Reserve Bank of Zimbabwe opened the market up to charging in foreign currency. ZERA has been authorised to take applications from retailers wishing to use free funds to import the precious resource. Statutory Instrument 212 of 2019, had allowed only a few services stations to sell in forex to guests of State and diplomats. Zuva Petroleum recently announced 8 services stations across the nation that would use DFI.

The logic behind the move is to use the free funds already in the market to ease the load on the interbank market. The secondary “advantage” of this move would surely see the forex taxes & duties making their way onto the interbank market to stabilise the exchange rate. DFI stations should hopefully the fuel queues for those with forex, and hopefully also those still serving in ZWL or else it could be a new headache for motorists without access to forex.

3D printing is changing the world. Automotive companies and enthusiasts are finding all sorts of useful ways to use the technology. Printing parts like gear-knobs, prototyping parts to fabricate or rapidly checking clearances. One company is taking things even further.The 21C has some already noteworthy headline stats, 1200hp AWD powertrain. A 2.9L 950HP V8 engine powering the rear wheels and two electric motors on the front axle. A tandem seating arrangement. A potent 1:1 power to weight ratio. What is most impressive about this vehicle is the way it will be built.

Each of the 80, $1.7 million hypercars will be built in a factory unlike any other. With robotic that build cars vertically in a space of about 17 square meters. These arms work efficiently complete tasks. They can be reprogrammed to work on different tasks in a short amount of time. While the usual mix of carbon fibre and other lightweight materials make up the body of the vehicle; the internals are printed from a proprietary alloy. This allows parts to be created as lightweight and strongly as possible. However, should a part fail in the distant future another can be printed quickly. The failed part is melted down to create something else. Road and Track took a tour through the factory and spoke to the Czingers (father & son) to learn more about how this innovation could change the motoring industry.

The mighty lion brand from down under is set to close it’s doors for the last time by the end of this year. As such dealers are offering huge discounts to clear what remaining stock they have left. Whichcar.com.au reports that some dealerships are offering up to $17,500 off vehicles. Unfortunately this doesn’t mean you’ll be walking away with a brand new V8 ute or Commodore for a bargain as this mainly applies to models such as the Colorado and Astra. The latter possibly receiving discounts of up to $8500. It’s a sad thing that such an iconic brand has been lost and this will surely make more exclusive models pricier on the second hand market.

This article originally appeared on Zimtorque.net