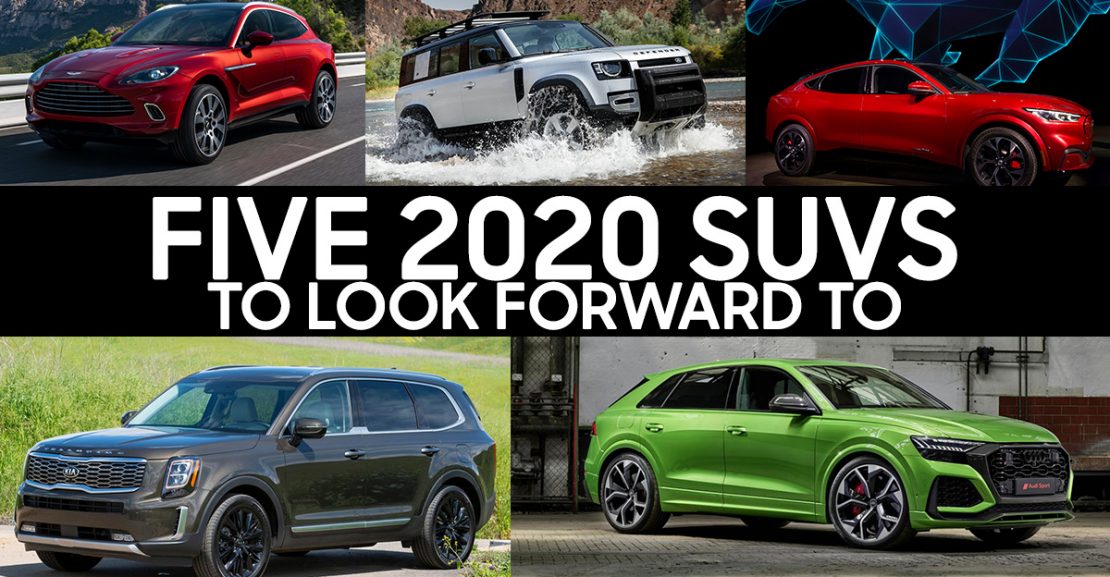 Sports utility vehicles makes up a large chunk of new car sales these days. They’re practical, often very safe and sometimes even more fun to drive than they have any right to be. Here’s our look at 5 SUVs to look forward to in 2020.

The Aston Martin DBX is somewhat an expected surprise. Just like Porsche did a few years ago, Aston Martin has moved to building a sporty SUV to help improve their bank balance and give them the freedom to create the GTs and sportscars they are known for. The DBX is powered by the same AMG V8 found in many of their latest models. The chassis is an all new in house design by Aston Martin. It’s doubtful you will see any of these out in the wilderness and more likely on the school run, but with around 550hp and height adjustable air suspension it should be more than capable to carry its passengers in comfort.

Defender enthusiasts mourned when it was announced several years ago that production was ending. It was never going to be a long death though. The new Defender 90 and 100 will be available in 3 and 5 doors respectively. There will be a variety of 2 and 3 litre engines including a mild hybrid 6 cylinder version outputting 395hp. These will be mated to the reliable ZF 8 speed automatic gearbox. The looks may be divisive but the off roading ability will win people over. The Defender is full of off-roading tech that has made it’s bigger brothers so capable off road.

If the Defender stirred up mild controversy with its looks, then Ford committed the marketing version of “Hold my beer”. To be fair they aren’t the only ones to take an iconic sports car name and use it on a crossover( I’m looking at you Mistubisi Eclipse). That aside, Ford have decided it’s worth the gamble to try catch up to the likes of Tesla. The Mach E will have a range of 340-480km depending on the exact specification and trim with the option of pure rear wheel drive or all wheel drive. A range topping GTPerformance model will have up to 450hp. Once people get over the name, i’m sure it will sell well. After all you will still be able to buy a thumping V8 sports car bearing the Mustang name for a while yet.

The Telluride is an all new vehicle for Kia, becoming the largest in its line-up. The Telluride offers seven seats and great value for money. Kia hopes to take on more established players in the segment like the Jeep Grand Cherokee. The Telluride powered by a 291hp V6 paired to an 8 speed automatic gearbox. The Kia is a handsome vehicle but its real selling point will be it’s value for money. It comes with plenty of standard safety and comfort features like automatic high beams, blindspot monitoring and 20 inch wheels. Optional extras include items like heads up display, ventilated second row seating and automatic wipers.

A cynic may look at this as poor man’s Lamborghini URUS and it would be hard to argue that. The RSQ8 is powered by a twin turbo V8 that is closely related to the unit found in the Lambo. The 592 horsepower rocketed this Audi to a new Nurburgring lap record for SUVs which i imagine must have been quite a sight. A mild hybrid system and cylinder deactivation help the RSQ8 sip fuel when it’s not devouring the road at speed. The interior is typically Audi and more closely related to the RS6. So much so that the RSQ8 slots nicely in between the RS6 and a Urus offering a best of both worlds experience.